Join us Thursday evening March 16 for a panel discussion about finding your audience featuring three successful authors who have employed multiple different and useful strategies for finding their readers.

Presented as part of the monthly Las Vegas Writers Group meeting. $5 at the door / free for current WSN Members.

“Finding Your Audience”
The Tap House on Charleston
Thursday, March 16 from 7-9PM, (doors open at 6)

PAINTED STORIES – “Love Is In The Ink”

Join us Sunday, Feb 12, 2017 from 2-4PM in the private dining room at the Bootlegger Bistro (7700 S. Las Vegas Blvd., just north of Blue Diamond) for the next installment of Writers of Southern Nevada’s PAINTED STORIES series.

We are going back to our original format for this one. There will be three Featured Authors and one Guest Artist up on stage doing pen & ink sketches as each author reads a 10-12 minute excerpt of their work. A Q&A with the authors and the artist will follow each segment and we’ll be auctioning off the artwork at the end.

Our Guest Artist this month is: Audrey Fox (www.audreyfox.com) a multi-talented multi-media artist who will be creating detailed sketches with pen & ink and colored pencil.

Our Featured Authors are: Morgan St. James reading a short story entitled “The Second Time Around”, Tonya Todd reading a chapter from her w-i-p novel and singer/songwriter Tim Veazey reading/performing “After Riverside”.

Doors open at 1PM for lunch. 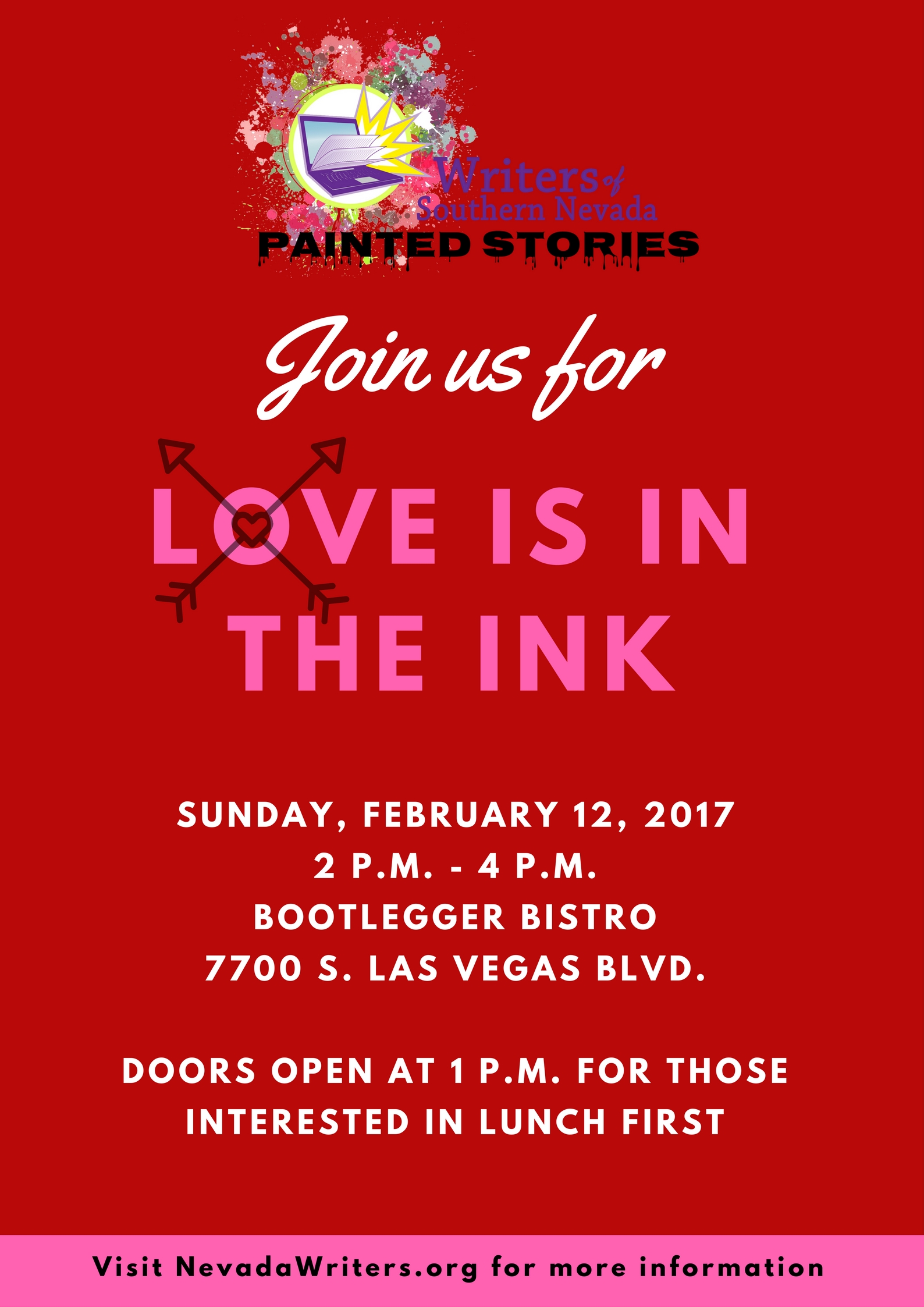 ATTN. LAS VEGAS WRITERS! – WSN Board Member Morgan St. James will be giving a talk “Character Driven vs Plot Driven” tonight at the Las Vegas Writers Group. The meeting is at 7:00 at the Tap House, 5589 West Charleston. RSVP and details at: http://www.meetup.com/Las-Vegas-Writers/events/220372490/ You might be surprised when we do a little exercise to see which way you write and what it takes to craft a well rounded story. Hope to see you there!

The Las Vegas Writers Group
Join us for an evening with Morgan St. James as she discusses style and plot. Is Your Style Character-Driven Or Plot-Driven? Do your characters make the story or does the story come first, then the
meetup.com

The word “syntax” has several definitions relative to the English language and grammar, but the one that popped into my mind is from the Bing Online Dictionary.

Organization of words in sentences

The ordering of and relationship between the words and other structural elements in phrases and sentences. The syntax may be of a whole language, a single phrase or sentence, or of an individual speaker.

I was listening to an audio book by one of my favorite authors—a New York Times bestselling author, no less. All of a sudden, there it was—the dreaded double-meaning syntax. The narrator said, “The two men sat down quickly in suits and ties.” Um, excuse me. Am I to picture these two fellows wandering through a men’s department in Nordstrom or Macys, then quickly plunk themselves down on a pair of chairs as they reached the Suits & Ties Department?

With apologies to an author whose following is huge, and an undoubtedly highly regarded editor, it seems it should have been something like “The two men dressed in suits and ties sat down quickly.”

The result of poor syntax or arrangement of the words in a particular sentence can definitely create confusion and in some cases are also quite funny.

Years ago, mixed up placement was something I was guilty of as an author. Then my sister Phyllice, trained as an editor,  brought it to my attention when we began to write the Silver Sisters Mysteries. All of a sudden, misleading sentences jumped off the page and I found myself acutely aware of them in other author’s books as well.

Somewhere in the recesses of my memory, I recalled a song with the line “Throw mama from the train a kiss, a kiss.” The phrasing was such a good illustration of today’s topic that I looked it up on the internet. The song, actually called Mama From the Train (A Kiss, A Kiss) was recorded by songstress Patti Page in 1956 and reached #11 in Billboard’s Top 100. The songwriter, Irving Gordon, said the song was about memories of his deceased mother, whose Pennsylvania Dutch-influenced English lead to quaint phrasings. Playing on the misdirection, there was a movie with Danny DeVito called Throw Momma From the Train. However, DeVito’s character would really have liked to do what the title suggested and throw his shrew of a mother off a real train!

As I searched, I found some real gems.

So was that buyer wearing leather pants or what?

Now that would have been a neat house for one of the three little pigs.

Except for the use of ‘that’ instead of ‘who’ maybe the woman had a unique way of wiggling into skin-tight jeans.

I wonder how much attention she attracted as she walked down the street.

“Only people with cars that live in dorms should be allowed to park in those lots.”

“Where one parent would be quiet, polite and conservative the other parent would drive up in a black Trans Am full of arrogance and conceit.”

The point of all this

Make sure your sentences and phrases are ordered in a way that makes sense. You don’t want people secretly asking questions like the ones above.

Want More from Morgan? Check out her website here!