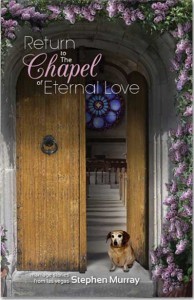 The release of Return to the Chapel of Eternal Love  was intended to be released in the middle of December. I am pleased to announce that after an unfortunate sequence of unforeseeable delays it is now finally released and available!

With love from the cast of characters at the Chapel of Eternal Love,

(EDITOR’S NOTE: Stephen Murray is a WSN Member whose first book “The Chapel of Eternal Love” was released Valentine’s Day of 2014 and won Amazon’s Best of the Month moniker upon its release. The sequel picks up five years later and revisits the eclectic cast of lovebirds after their wedding day. )